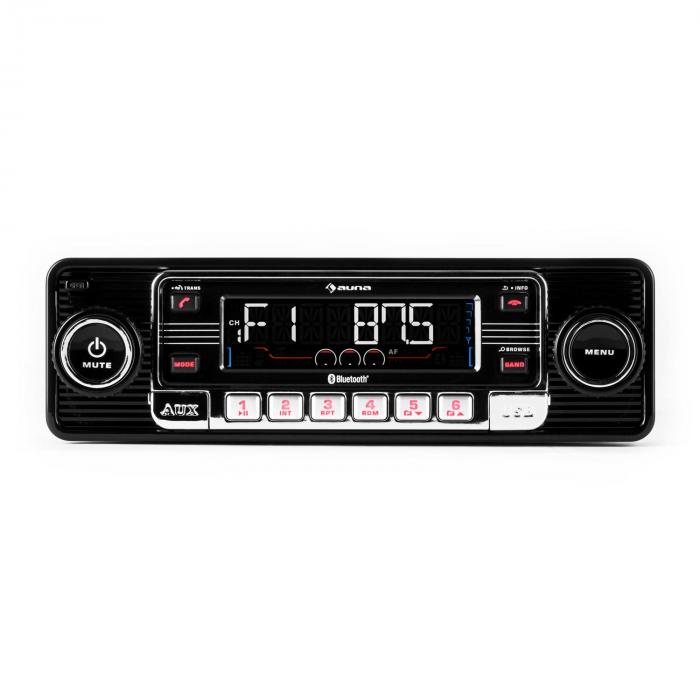 Selected reviews from the German press

The Auna TCX-1- RMD is a nostalgic retro car radio, which specialises in modern functionality to accommodate different audio components despite its classic design. To this end, the Auna TCX-1-RMD car radio features hidden USB and SD ports for the direct and easy playback of MP3 tracks from portable audio devices such as MP3 players, USB flash drives, and SD cards. In addition, behind the black control panel can be found an MP3-compatible CD player that reads rewritable CDs. With a Bluetooth interface and built-in microphone, the device can also be easily used as a speakerphone. Rounding out the stereo's range of features is an AM/FM radio receiver with RDS function, which organises the transmitter spectrum with 18 FM and 6 AM station presets. Via the unit's line outputs, it may be connected to 2- or 4-channel amplifiers to achieve an even higher level of performance. Operation of this TCX-1-RMD classic car radio is easy and safe for use in traffic thanks to a simple user section and the illuminated LCD display.

What will be delivered

(2 Ratings) Write your own review
No review available for this item.
£5
discount
Don't miss out!

Get £5* off your next order when you sign up to our newsletter.

* You can unsubscribe this service anytime you want.
Free delivery, no minimum order 60 day cooling off period Extended Cooling Off Period! Help, Contact and Return
To improve our services, our website uses cookies. To continue, please agree to use of cookies.
Top of page