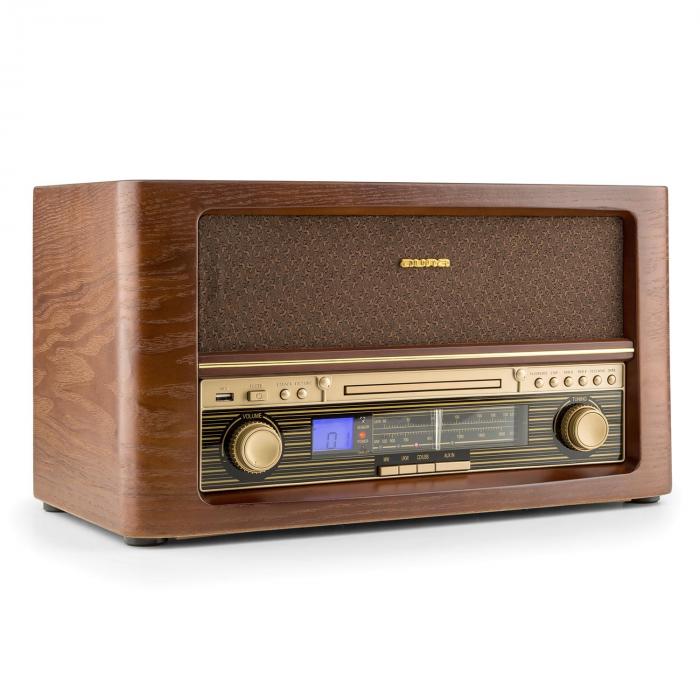 The best of both worlds! The auna Belle Epoque 1906 retro stereo builds a musical bridge between the past and the future with its technical refinements and a charming design.

The system offers the possibility of accessing different musical media. For example, an FM radio tuner with an analogue frequency band display and manual frequency control is included in the range of playback options. In addition to conventional disc types, the CD drive also reads MP3 CDs. This way, the device provides sound reinforcement for music libraries with hundreds of titles.

The nostalgic auna music system features an MP3-capable USB interface, which is also equipped with a recording function. This allows you to record CD tracks signals directly as MP3 files on USB data carriers to be subsequently processed or archived.

In terms of optics, the beautiful auna Belle Epoque 1906 stereo system follows the visual tradition of its older brothers from the past. The shapely curved case emphasises the charming nostalgic approach, as do the authentic details such as the fabric speaker cover.

What will be delivered

(0 reviews) Write your own review
No review available for this item.
£5
discount
Don't miss out!

Get £5* off your next order when you sign up to our newsletter.

* You can unsubscribe this service anytime you want.
Free delivery, no minimum order 60 day cooling off period Extended Cooling Off Period! Help, Contact and Return
To improve our services, our website uses cookies. To continue, please agree to use of cookies.
Top of page